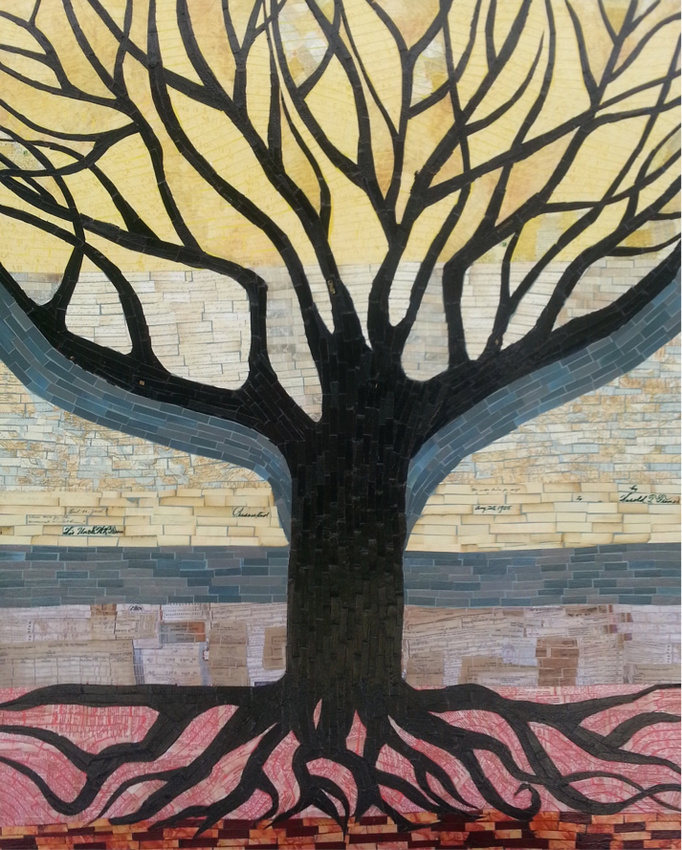 The medium of collage can be said to be the quintessential art form of the modern era. Certainly, the aesthetic it promulgates – of rapid, jagged juxtaposition, of quick change and interior contradiction – has dominated the mental and visual patterns of society since the early 20th century. But there is another side to collage, a gentle, contemplative, and even restfully coherent side, that persists in our time as well. For all the wit, vigor, and even disruption that manifest in the work of Claudia French, for instance, it is the “rational” side of collage upon which she draws to assemble her elements into forthright, starkly described images of self-possessed gravity. Employing a medium prized for its discontinuity, French conjures stark apparitions of ponderous solidity – apparitions, however, whose features shimmer with the electricity collage brings to a surface.

The collage aesthetic dominates French’s entire oeuvre. Even her series of quasi-traditional religious icons (based equally on the opulent but austere Eastern Orthodox votives she grew up with in her native Romania and on the florid depictions of La Virgin de Guadalupe and other saints that recur throughout the Mexican culture now surrounding her in southern California) have been built up out of myriad diverse segments. Indeed, French treats collage as if it were a direct descendant of mosaic art. A body of collage work from the beginning of the 2000s, for instance, seems at first to present diverse, or broadly related, images in rolling cascades, the appropriated pictures attached to one another obsessively rather than logically. But French’s hand gently guides the myriad elements into a coherent structure – not a “whole” per se, as she deliberately maintains the quick cuts and jumps of the collage aesthetic, but a rhythmic continuity that covers its ground with wit and brio.

In her recent series, French pays homage to nature, finding in some of its most representative factors – trees above all, but also geological strata, the occasional animal, and the qualities of decay – a sensual field no less than an ecological presence. The renditions of trees range from the nearly naturalistic to the highly stylized and almost abstract; but the fact that, regardless of picture size, they are all composed of collaged segments of paper unifies them into a statement as well as into a format. With few exceptions (exceptions that seem quite deliberately to prove the rule), the tree rises from the soil, defines the vertical center of the image, and, somewhere just north of the picture’s epicenter, breaks into myriad branches and, often, foliage (as well as, less often, fruit). The formulaic armature allows for a great deal of variation, dictated as much – but only as much – by French’s own fantasy as by the species of tree depicted in each work. In all cases, no matter how varied in form, color, or visual texture, the work is constructed of so many (relatively) small collage elements, laid in side by side with others of their ilk to create skies or tree trunks or other pictorial surfaces. It is a visual reasoning, again, that descends directly from ancient mosaic art. It gives the treeworks a multiple quality: that of paintings, that of stonework, that of a cultivated garden, and that of paper, almost of a page. The medium disappears behind the message by alluding to many media. French’s is an art of observation, but equally of construction.

The work immediately preceding the trees set the tone for that series by exploring even more directly the possibilities and ramifications of collage technique. A series of small, colorful abstractions, featuring an icon-like form (or compounded forms) framed by so many undulating rectangles, set a playful tone that is never entirely absent from the tree images. These eccentric presences, decidedly organic but otherwise unidentifiable, hop and writhe like marionettes on an invisible string. Their palette, similarly vivacious, is almost fructose in its sweetness. While working on these, French also realized a contrasting series of collage works composed similarly of many small strips of paper, but this time hewing towards a worn and earthy palette. These materials were in fact harvested from old books, including bibles, atlases, and sheet music, capitalizing on their evocative texts as well as textures. They invite closer inspection, which reveals their discontinuity as much as their antiquity, bringing them into modern form. They constitute not simply a recycling of the old into a newer modality but a kind of eidetic nostalgia, a quiet celebration of the forms knowledge once took. Such forms are at once revealed and disrupted – but never quite destroyed – by French’s recycling activity.

Claudia French has lived in and through the extremes of European culture and those of American. Her use of collage embraces her experience on both continents and her pictorial sensibility reveals a natural link between the two places. In this respect her oeuvre argues for the commonality of human insight; even as her work derives from and contributes to the visual culture of Western civilization, its breadth and symbolic ambition – ultimately resting on that universal signifier, the tree – point outward from Europe and America. French has found her fertile ground in collage, and from it her cultivations show us the world. 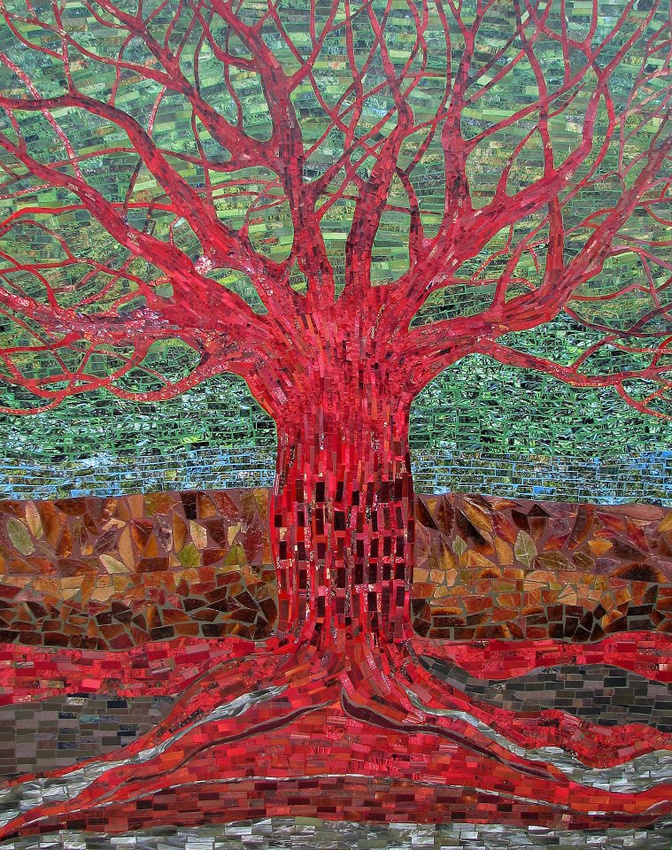